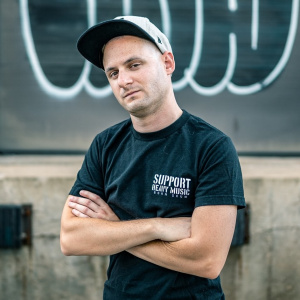 LiquidSound Records was founded by current Chief Executive Officer Ryan Katz in November of 2009. Born and raised in Akron, Ohio, Ryan was instantly drawn to the music that surrounded him. From an early age, he learned guitar, and eventually joined a band. It wasn’t until 2002 when Ryan met Thom Hazaert, who was then the owner of Loudside.com and the Total Assault Street team. Ryan instantly became involved, even in a minor role, with some of the activities Mr. Hazaert embarked upon, and in 2004, Thom founded Corporate Punishment Records, a very successful independent label out of California. Ryan gravitated towards learning all he could from Mr. Hazaert about running a record label, and this was the first step towards what LSR is today.

Eventually, Ryan had ambitions to work with music directly again, and learned the ins and outs of music production, along with the help of his cousin Miles Sherman AKA DJ Avedon. At the time, Ryan had a passion for hip hop, and crafted his skill-set towards creating beats that would help shape the mid-2000’s hip hop sound. During this period, Ryan produced for many underground hip hop artists and was eventually discovered by a few affiliates of The Island Def Jam Music Group, where he was also brought in by Military Minded Entertainment. Seeing that he had much more to offer than just production, Ryan eventually used his skills at showcases around the region and scouted some of the most promising talent around the nation.

With ambition and passion, Ryan finally decided to create his own label, LiquidSound Records, in the fall of 2009. Displaying a passion for all genres of music, LiquidSound Records has grown into one of the most diverse agencies in the nation, with artists and bands represented from hip hop to country to metal to blues. Currently, LSR’s main entity is the highly regarded management program, where artists and bands get full time management and representation. Clients receive hands on attention directly with Ryan himself. There is no middle man involved. Public Relations, Musical Coaching, Tour Management, Booking, Social Media Marketing, Brand Management, Graphic Design…these are just some of the many assets included in one of the best management programs in the business. Contact us now to learn more!