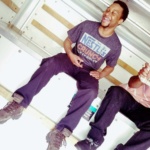 Today, we sat down with our artist Calib Deron for an interview. Here is what he had to say:

My hometown has challenged me tremendously. Being an independent artist in Kansas City comes with challenges because, although the music scene is on the rise, Kansas City is not a mecca city for entertainment like Cali, Atlanta or New York. There’s a lot of violence and negativity in the inner city so to stay positive, focused, and alive is a task. It’s more reason and motivation to get to the top and make Kansas City “emerald city”.

I probably would say Lil Wayne influenced me the most in my earlier years of developing my craft. As I’ve gotten older, I just appreciate good music in general in any genre. I’ve really had a mixture of influences throughout my life.

If I won the lottery, I would buy a handicap accessible house with a 24-7 caretaker for my mother. I’d invest the rest but I’d keep a little so I can buy a few toys and trinkets for me and my 3 boys.

My advice to underground musicians as far as discipline would be to keep creating and stay consistent. One minute a song is hot the next its not. I think keeping a steady budget to release new material constantly is definite must.

A good song writing tip is to always think about how relatable you are but also to do the best YOU! One thing I like to do when I record is to try different mic techniques. I also switch out the mic depending on how I want the song to sound sonically. I also like to leave one can off when I record just so that I can hear how I actually sound.

I think all of my family and friends support what I do but it’s one of those things like ‘yea thats great, but where’s the money’. I think everybody knows I’m great. They’re just waiting for everybody else to see it as well. It’s coming though.

If I could open up for any artist I would want to open up for Jay Z only because to me he’s probably the most iconic artist and he’s been in the game a long time. I really wouldn’t mind opening up for any big artist.

I would wanna have dinner with Bob Marley simply because he’s Bob Marley and I know that we going smoke good, eat and talk about some deep shit. He also made the best song of all time. “Don’t worry, Be Happy”

I think so far what I like about LiquidSound is the constant communication. Ryan is very engaged and professional so you can feel good about the handling of your music affairs. There are also a lot of great resources and information.

In 10 years I see myself producing and writing for other artist as well as myself. I definitely would like to be doing music full time. In 10 years, I’ll be 40, so I kind of see myself as being a coach/mentor. Maybe throw educational seminars on the music business and how to make a profit. I’d like to be to enjoy the fruits of my labor and travel with my kids.