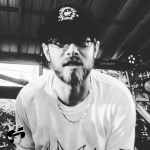 Today, we sat down with our artist DaꓘK Da Maven for an interview. Here is what he had to say:

Well I’m from partially rural America, so since its a small town everyone knows everyone. Music was always considered a hobby and not a career. Everything is a struggle here. From building a market to finding someone to listen to it, most think its a joke and tell you to get a real job. In that regard though, it builds character along with perseverance. To make it out of Arkansas and put Rogers on the map for music is what made me the artist I am today.

This is a harder question for me to answer so simply. I like and listen to a lot of different genres. Each of them add to my inspiration. If I could choose one it would be Lupe Fiasco. He is the definition of an artist in every way. From simple similes to overly complicated metaphors, relatable stories to history lessons . He encompasses hip hop as a genre and as a pure art. Also shows that evolution in art is needed.

A house with a studio fully built into it. Along with my little list of things like cars and equipment. I’d definitely want a permanent place for me to be able to work from without worries. The house would have enough rooms for the crew to come through and record professionally as my record studio would be ran out of it.

Always learn. Don’t ever think you know it all. Music is ever changing. It slows and stops for no one. The second you believe you know it all, it will change and you usually fall. Now, I’m not saying to delete your ego but be reasonable with everything. That’s why you learn and adapt.

Only two tips honestly. First, be moderate with yourself. you are your worst critic. write the song then proofread and edit. Remember perfect doesn’t exist.
Second, practice and remember there are multiple edits it will go through in the process. it can sound rough at first then get mixed and mastered and be absolutely amazing.

They didn’t like it until they saw the progress. My dad backed me, along with my grandma but passed that it didn’t make money so it didn’t matter. I was blacksheeped for the longest . I still don’t know some of the family on my dad’s side because we were basically too poor for them. My friends on the other hand support me. I rap with my friends though. that makes them biased to me in a way.

Honestly, Lupe fiasco Or Kendrick Lamar . They have the best fans. If you’re lyrical they bump it. if you’re crazy on just swag they bump it. its art but they also appreciate the show as well. They don’t deal with artists being boring . you have to encompass the art otherwise you won’t make it .

Roger Miller would be the guy. I know he is country but he wrote most of all the old country that is revered today. he was also catchy and could freestyle country off the top and be good at it. He was a master of vibe. along with inspiring everyone of his day.

The ability to talk to someone who offers solutions to problems. Most management I’ve dealt with just causes issues for the artist. They also don’t have any interest in the artist and just want as much money as possible from it all. With Liquidsound Records. There is a level of care that is nice to see. When issues arise or questions pop up, it’s not hard to get answers or solutions. most of the time they are already sent to you in the daily messages. As far as advice , Use everything if you can. Or Atleast try to apply it in someway.

Running my studio along with selling out shows. along with performing i might add. making new fans and experiencing New areas is the best part. along with helping people get through their daily lives.