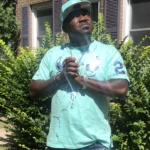 Today, we sat down with our artist J-Ro for an interview. Here is what he had to say:

My hometown was very rough coming up being that it was so small doing big city things. No one has ever made it out as an entertainer, there were basketball superstars, baseball stars, and football but not one entertainer. I grew up fighting under bigotry and gangs so it made my music harsh and soulful.

The one artist that influenced me the most is Scarface (Mr. Brad Jordan). The reason I took to his lyrics is because of how real he was and how I related to his story. At one point, I called him my lyrical father lol his storytelling was and is legendary.

The first thing I would buy if I hit the lottery tomorrow is a house for my family!

My advice to other underground musicians is this that they find out find out what music is to them. What I mean by that, is music is my therapy every time I write it releases tension of any kind.

Every songwriter is different, but what works for me is figuring out the title then the chorus then the lyrics. The chorus for me sets the tone of the song.

My family has supported me as long as they didn’t have to put any money down, just being real. My wife is my number one fan!

The one artist or band that I would open up if I got the chance to is Scarface and Wu Tang because of how they relate to their fans/audiences.

The one musician that I would go to dinner with is Sam Cooke because he was an awesome singer and songwriter and performer. He just didn’t get to blossom because of his early death.

The things about LiquidSound Records that I like are the consistency and communication. They haven’t left me in the blind or done anything that I was not aware of. My advice to any future member is to jump on board ASAP!

Where I see myself in 10 years from now is with 10 albums and with at least 5 platinum albums. One of my goals is to be nominated for a Grammy. I will be financially stable with my own reentry program for those coming out of prison!