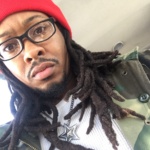 Today, we sat down with our artist KJ The Stone for an interview. Here is what he had to say:

I’m originally from north Philadelphia, lived in Virginia for a while, then Delaware . I grew up loving a lot of different styles but being from Philly always drives me to not settle for the easy songs. You can’t be from Philly and not have content in your music. Even the clowns who rap in Philly are ten steps ahead of the average rapper from other spots. It’s a different scene and it drives a competitive sportsman ship on everyone who mentions the city . I haven’t lived all of my life there but Philly is definitely in my heart and always the source of my fire. When I’m lacking inspiration I quickly grab a Roots album and just let the sound and soul of Philly talk to me….. you see the end results!

The Roots and the lead vocalist Black Thought. They are unorthodox and not limited to any specific genre. Black Thought has to be hands down the most underrated artist ever yet he still has a respect from those who are to be his competitors that is unmatchable. He and the rest of The Roots are living legends and my hometown heroes.

If I won the lottery tomorrow the first thing I would buy would be my life back! I did twelve years straight and I still have to pay a $12,000 restitution! I’m a slave in a bigger cage. I’m not motivated too much by fancy stuff anymore. I’d spend majority of the money on investing in my music and the rest on a simple but consistent stream of income in side.

My advice to the next artist is that you shouldn’t try so hard to look like and artist. Just spend that time and money to actually be an artist . Invest in your craft and not the Jordan corporation or Benz corporation. If you put your energy into actually being an artist now you’ll get all that stuff in due time. And take yourself seriously. Never let someone else’s views of you determine your self worth or abilities. If anything be motivated by the doubt.

Write your story not Tony Yayo’s or some local killer you heard of from your uncle. And when you write your music always think long term and determine if this is something you want your kids to grow up and remember you by , or if your gonna still be cool with performing it ten years from now on a reunion tour.

My family used to clown me as a kid because I was going and of course they wanted to persuade me to do something “better”. But over time they saw that I was accomplishing things and putting in the time and energy to actualize what I wanted. Now if I even speak about stopping I get scolded like I said I’m trying to drop out of high school.

I’d love to open up for The Roots. I feel like they have a audience that is true to hip hop and if you can swing them they will be loyal supporters until you don’t exist. I want people who take the time to hear the lyrics that I split my head open to cook up. Not just bounce to a baseline.

I’d love to talk to Prince. He had so much success but was still miserable with the business. He died hiding music that could’ve given him more fame and fortune yet he held it in just to spite his label. He was definitely a weird individual but from an independent artist standpoint, he was the Incredible Hulk.

With LiquidSound Records, I love the communication. Even if the things you’re concerned about are not on the agenda, your needs will still get addressed quickly. If you’re interested in joining the roster, don’t be shy. Reach out and ask away. I did and got nothing but transparency from the first reply.

In ten years I see my music definitely being a sustainable career and I see myself in a position to be able to show others how to step over the games and get to the money. I definitely strive to build a household name so in ten years that will definitely be established….. I’m just one hit away!