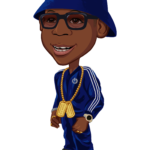 Today, we sat down with our artist Lonnie Dangerous for an interview. Here is what he had to say:

I’m from Chester, PA, right outside of Philadelphia. It’s a very musical environment. The high school kept a cool marching band, and hiphop is what us kids were into. And I used to get excited about getting local DJs mixtapes like DJ Goody. And hearing what he’d do to mix a song I knew and flip it or break a new artist or record on the mix. And I think that art of flipping mixtapes is dying out and I’d like to bring it back with my style on it. Originally, I didn’t want to ever do a mixtape because of the way they’re being made and the perception but, I wanted to always be on those mixtapes back in the day, so now I can show how I’d do it.

My project is a three part piece called Ambitionz Az A Writer, The mixtape part one is out now hosted by DJ Noize, and the piece is in honor of the late great 2Pac. My favorite rap artist of all time. All Eyez On Me was a double cd, so I’m doing an album and mixtape. I did so many songs for the mixtape decided to split in half. 2pac inspired me as a kid to love myself and that I’m beautiful and worthy. In my darkest days, I could hear his lyrics telling me to hold on, be strong. I want them to play strictly for my niggaz at my funeral. Because he ends it by saying… “ be true to you and believe that there’s no one bigga, ‘cuz they can all suck dick! … it’s strictly for my niggaz…” I felt that. Pac helped raise me. I was wild and hardheaded, his lyrics touched my soul. He was honest.

If I won the lottery today, I’d invest it in myself and my business. I make products that help the people so it’s full circle. Open more businesses, learn more. Travel, I’d get an estate, hotel, and recording studio in a few countries. Get into inventing and creating content. Building a production company. Building Lonnie Dangerous as a brand. Create multiple revenue streams, get into commercial real estate, I would just spend my time creating a branding empire, strategizing myself to become a trillionaire.

Learn as much as you can about the art form that you want to claim to be an artist of. And let’s congratulate other artists. Even in competition it’s friendly, it’s not only one bag. There can be a thousand kings. There’s millions of stars, none of them take away from the suns shine. Let’s build together, you can be solo and still support others, but if it’s wack… tell them. Stop, supporting wackness because it’s your buddy. That ain’t helping him. Bottomline, love thyself. And hiphop is a family, so I already support your dream. Keep pushing and don’t let anyone stop you. I believe in you. As far as my discipline, you want to master your craft. Rap isn’t an instrument in the modern sense, but you are an instrument in the beat so you need to learn to work at that. The writing, the rehearsing, the recording, the performing. And it’s also like a sport so you need to be on your A-game when you want to be taken seriously with all that. Learning your voice, tone, cadence, attitude, you need to create. And now you need like a new one for every song. These things are created over time, after constant work. It’s called a craft. Millions want to do it, millions are doing it but can you set yourself apart from the millions.

The closer the music is to you the more we can relate. But also as an artist I don’t like people telling me anything about my art. I say whatever you do, give your all, or don’t do it at all. Who cares what others think. Who cares if you fail. Who cares if you’ll regret it. Live! And embrace these moments because that’s all we really have. You must want to be heard if you’re into music, well. SHOUT IT OUT LOUD, BREAK SHIT! KISS THE GIRL, TELL HIM YOU LOVE HIM, GET THAT MONEY AND LOVE HARD, REAL HARD, THE DIRTY KIND.

I’ll be honest, it wasn’t perceived well. And even those who publicly supported, deep down it seemed to be jealousy and resentment. But the music is where I used to seek refuge and therapy so I never had that support and really never needed it. I love doing hiphop, it’s the love of my life. It’s just an honor to be apart of it and people support my art. I hope it inspires others. That’s the support. There’s been issues but you know the saying… “family business stays families business”.

I’ll gladly open for anyone you’d like me to, but personally I’m not an opener, unless this is a can. I’m an All-Star, I’m a closer. I take her out on a date and wine her and dine her, then pay for her Uber ride to your house for some naked wrestling?

It would be Pac, (no brainer) but I’d have so much shit to catch him up on. The Suge thing, the Biggie thing, the Kanye thing… and like where would we eat? I know he loved El Pollo Loco as do I but… it’s Pac and he hasn’t been able to live and die and live again one more time in la in almost 20 years. Maybe he’d want Roscoes, but they don’t serve Thug Passion… ikr. Maybe for Pac, then I’d definitely get the two piece white meat with the waffles. I think they’re now calling it the “Obama”. Mac and cheese, sweet potatoes, and a Thug Passion too. I would pick his brain. We both are actor/rappers so I’d get into all that deep shit, and revolutionary shit, and art. He seems to be a dude like me that’s multifaceted.

I’ve enjoyed learning new things and also feeling like I have an assistant to help me with my business, as well as avenues I’ve never thought of. It’s a great asset to a any indie trying to make moves.

In ten years, I’ll be a platinum artist who has a household name and brand, with my own sound called “muscle car music”.