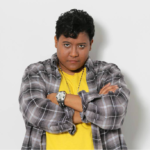 Today, we sat down with our artist PJ Dakota for an interview. Here is what she had to say:

My Home Town is Flint, MI and we have some very musical people from here. I’m very proud of those individuals. If I had to name one, it would be the group Ready For The World. They influence me on helping me write good catchy songs and the idea of having your own sound and look. Even though I was raised in Flint, I was more influenced by the Motown Sound of Detroit MI. So many great artist, producers, and song-writers came from that era. I just loved it. Stevie Wonder – I love his song writing. Smokey Robinson’s songwriting and just the genius of Berry Gordy. Then there is Michael Jackson who started at Motown but left later, HUGE Influence – just to see a young artist with so much talent let me know I could do it to. Those are the type of people who influenced me the most.

If I won the lottery, the first thing I would buy would be a house.

Discipline is very important to have in anything. But when it comes to your artistry it is a must. It helps you shape the direction and tempo of your career. How fast do you want things to move along? So you have to create a master plan that requires you to discipline yourself to get up in the morning and go to the gym, and eat a health breakfast, warm up your vocal chords, make needed phone call, update social media, go to rehearsal, finish writing your new song, etc. Don’t let things distract you, stay focus, and stay on track of things. This becomes your everyday routine. Discipline.

As far as songwriting tips – write what you feel. Learn the different writing styles there are and pick one that works for you. Or just freestyle it. Learn and understand syncopation. Recording tips – always research and learn new things. Learn the proper mics to record with projects.

I like all genres of music and I like a lot of artist. So I could open up of anybody but since I have to pick it would be Janet Jackson LOL. But she never has a female artist or band open up for her so I’d have to pick Bruno Mars. He currently embodies what I want to bring to a show. He truly entertains you at his concert and his band is dope.

I think I’d have to say other than MJ; I’d go to dinner with Prince. Why…because he’s Prince LOL. He was another talented artist and seems almost mysterious. But his musicianship was so stellar; I’d love to just hang out with him just to watch him work.

I enjoy the one on one video meetings. Makes it personal and that LSR cares about my thoughts and concerns. I also enjoy the promotional graphic art that is designed for each artist. I would definitely suggest it to someone for them to join. I like that LSR is very resourceful in providing the artist with tons of information that is or can be beneficial for the artist. I would advise them to ask question about their artistry with LSR and get an understanding of what they need so LiquidSound Records can cater a management plan for them.

In 10 yrs. – I see my career doing very well in the songwriting department and production. I know I will be more behind the scenes and studio production bond. I see myself getting more into film work as well.