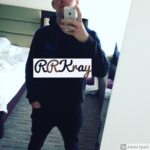 Today, we sat down with our artist RRKray for an interview. Here is what he had to say:

My hometown as shaped me into the artist I am today, as it has a huge influence in my music. Being born Portsmouth and being half Cuban…you need to rep that.

I have three artists. The first one is Tupac Shakur. He was outspoken in his music and spoke about the hood…what was happening in it. He also brought a power message in his rhymes as well. The second was DMX. He had all the odds stacked against him, even with his mouth wired shut. He performed and his music as a big influence on my music and my rhymes. The third one is Cuban link. His music also has a influence over mine and he’s repping for the Cubans and we need some one like that.

If I won the lottery, then I would give some to my mum as she’s been a big part of my life. I’ll give some to my daughter also, and her mother as well so they can comfortable.

Always recite your rhymes make sure the message is loud and clear so your fans can hear it.

My mum is a fan of my music. She gives me the strength to go on. My daughter’s mother isn’t. However, she isn’t stopping me from achieving my dreams.

If I could open for anybody, it would be Daddy Yankee, as he is the powerful Latin artist in the Latin community and I would love to perform even one song of mine to him and his fans.

If I could have dinner with one artist…haha…that would be Becky G. She was in the power rangers and I’m a fan of her music!

I’ve enjoyed all of it! From having a EPK to getting my music out on DJ Pools…without them then I still would be doing things on my own and not as effectively.

In ten years, I would see my self living comfortable with the hard earned cash I made doing my music.